Somewhere in 2009, I had an idea to device a scheme to build a residential addition with just 2 people, and when necessary heavy equipment like forklifts, cranes, pump-jacks, and other material handling rigs. Some tasks became untenable, and I had to bring in specialized sub-contractors to get the job done quickly and safely. I’ve utilized a lot of volunteer labor, but I cannot expect altruism on a regular basis, but often on a quid pro quo status. If you come help me set a few fiber cement panels, I can home help you move some boxes, or access some online service.

As my project enters a more time sensitive window, where the sun’s UV radiation, can regrade certain elements, I need to expedite the installation. If you have the tools, interest, and courage to come on an adventure with a demanding building scientist, please contact me. Direct message me through my @greenconcepts twitter account, or a phone call to +1-818-308-5773. I don’t have much to offer, but if your financial requirements align with my renumeration model, and you see an opportunity not just to contribute to the Dark Green Sandwich Panel Addition, but participate in an ongoing research platform, we can publish our journal articles together. I have opportunities in the construction of both the information and physical world for the next six to eight months. I Look forward to our discussions (Accepting applications on a continuous basis, 1st round interviews from 13 March – 18 March 2015).

Some aspects of construction I’ve not had the pleasure to perform. I did not handle the live electrical leads from the local power utility to the service panel. I did not make the final circuit connections at the main or sub-panels. I could have purchased scaffolding frames, planks, and level legs, but chose to select a local experienced scaffolding contractor instead. I hope in the short run, it will save money.

The assembly crew arrived at 7 AM for a 3 hour assembly of approximately 100 linear feet by 18 ft high scaffolding. My roof line is quit complex, so the various levels of the scaffolding also varies considerably to accommodate the level changes. I have learned many tips for the next scaffolding order, and wanted to share them, so the reader does not share in the frustration I’ve experienced while the planks and frames on my jobsite.

Safety is the 1st concern. Clear the jobsite on any obstacles for either the plaster or masonry scaffold frames. Have a plan for the contractor to work their way around the building, noting any special restrictions when it come to locations and widths. I have several constrictions around the building, and my contractor especially fabricated some frames, which is very convenient. Where lower roofs or ledges may interfere make sure the distance from the workplane to the first scaffold plank is maintained. One several locations around my building, the frame is pushed out beyond the maximum safe distance, or impedes flexibility by not allowing plank movement.

OSHA guidelines recommend a maximum of 18″ separation from 1st plank to work surface. International standard use a 0.5 meters standard, so technically you can maintain a 19-5/8″ gap between the plank and wall, and not violate any safety protocols. As the jobsite installation requirements moves from windows, flashing, weather proofing, to exterior cladding, the planks need to accommodate that variety too. I tried to maximize my plank location to 18″ from the wall surface, but there are several frames that were set too close, and I had to remove a plank, making the 36″ walkway just 24″ which can increase fall risk.

I should have made a scaffolding floorplan or elevation plan, and signed off with the contractor exactly where each level and position fell, to aid in window and door installation. I found myself upside down on the scaffolding planks installing heavy large windows. In one location, the headroom from level to level is under 5′ which forces a constant assembly and disassembly of the planks. With a complex roofline, I would have preferred a slightly higher final plank level, instead of going up and down discontinuous plank heights.

The contractor, for unknown reasons, on a few levels, left just one 12″ scaffold plank, instead of the 36″ wide plank boards, removing any margin of safety. I have not found any difference between solid wood planks to engineered planks in terms of stiffness. It took weeks to get used to the springy nature of the scaffolding, but if installed properly, that becomes an irrational fear. My contractor agreed to bring additional planks, once I complained too.

The scaffolding system allows me to perform faster and safer than any ladder jack, pump-jack, or other system. Careful considerations before the scaffolding crew arrives makes the job so much better. 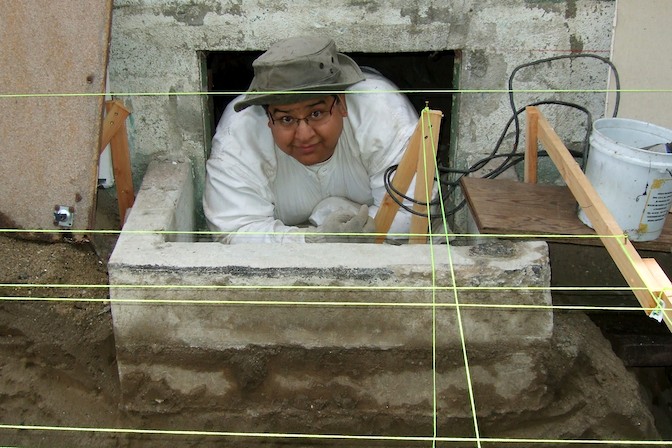 Venerable Mac software developer Dantz, coined the phrase, “To go forward, you must back up,” referring to software that would automatically duplicate and restore computer data. My online documentation of my SIP house has been lousy, and only the very fortuneate who have visited the jobsite has seen the progress. Over the next couple of weeks I plan to revisit the past, and restore the missing posts over the years. Most of this project is found on private SMS micro blog feeds, to give me the timeline to restore the missing information.

On 22 June 2012, my two year LA building permit expired! Usually that means paying the City an additional fee. This time I have the City on my side, and they like the progress I’ve made, and want to see me finish the house, so far without additional cost. In anxiousness to continue to build, I drove myself a little too hard.

I am in the process of building the second floor of the addition, and had to move and prepare the wall panels. After repositioning 22 panels, I damaged my shoulder muscles.

Foolishly I thought I could work through the pain, and was able to groove out the foam, cut the posts that fit into the side of the panels, and prepare the bottom plate, until I could not lift my arm to my mouth. After one week of extreme pain, and two of sling rest, I’m getting a little more movement back in the hand and shoulder. I still cannot lift my arm over my head, but am mostly pain free and will try next week to start hammering and assembly of the wall components.

Shoulder pain is not to ignored, especially when you need your arms to build a house. 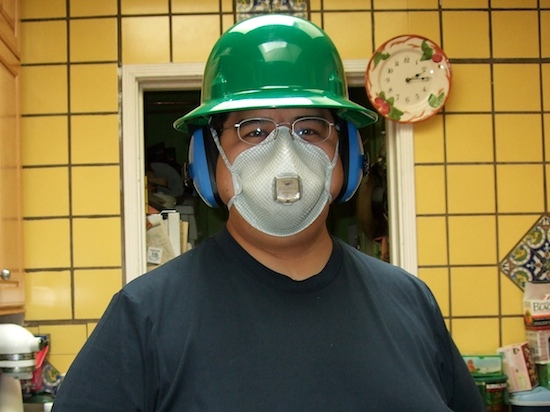 Usually, a topic like hardware means a new mac pro, but this week I’ve ordered and will receive tools for demolition and construction. I ordered from around the country ear protection, an electric adhesive dispenser, a pavement breaker, respirator, fiberglass fish tape, true RMS multimeter, hard hats, a self feed bit, and some books. The orders started coming in last Thursday, so the construction project will begin late this week or early next.